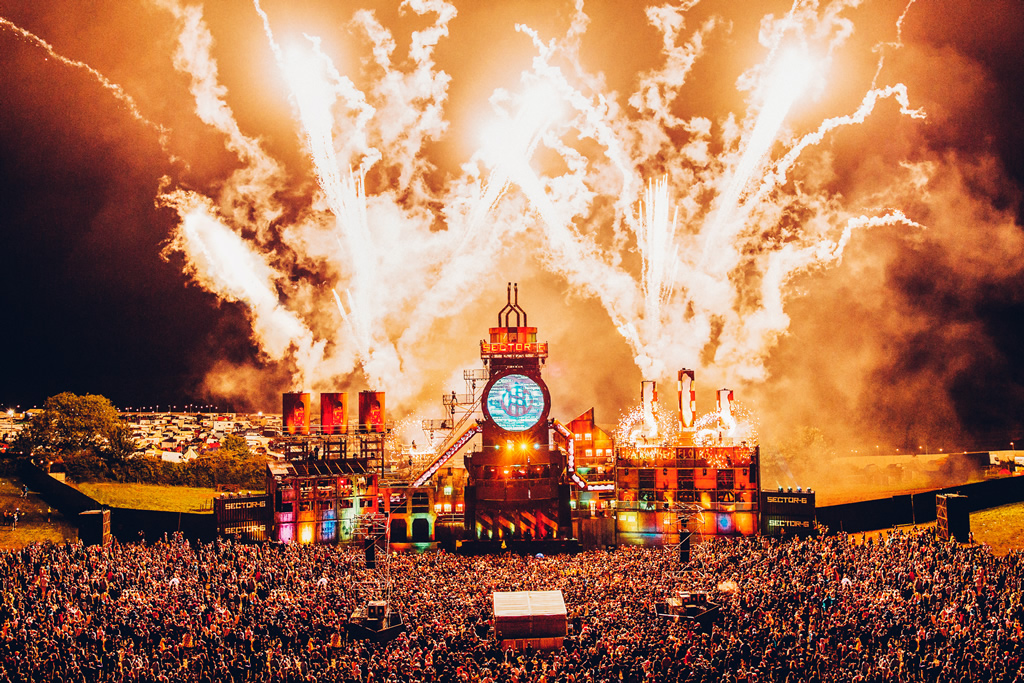 Maybe I’m old now. Maybe Boomtown is just too good for me. But after this weekend that spanned the length of a working week, I feel knackered.

It started on the Wednesday. Did we really need a day more of mental-ness this year? I don’t know, but I seemed to think we did when we booked it. And when we turned up in Boomtown Springs, a luxurious exclusive corner that we went in for as a treat, it did feel at first like we’d made the right decision. We were greeted at the gate with an extraordinary welcome: young women – noticeable though for its lack of men – in tight white tennis outfits skipping up to us and offering to take our stuff. Through the gate we were offered a flute of champagne and a programme. It felt, though, and I have to say it, a little forced and overwhelming. It was a relief when the woman who was helping us confided she’d been snaffling the free champagne all morning. There we go Boomtown, you’re back.

The problems started when we tried to re-enter. Yes, I know, there’s always been alcohol restrictions and first-entry only rules. But have they ever really been enforced? Not as far as I knew. We’d bought beers for a friend who didn’t have time to pick any up, and as we were the only members of the group with a car, it seemed fair enough. We’d taken the beers in on our first entry, so we headed back for our rum. And yes, I know spirits aren’t allowed anyway really, or glass bottles, but that’s why we’d decanted it, see? At reentry, they dug through our bags and picked out my water bottle. ‘What’s this?’ the guy asked, and took a sniff. ‘Ugh, that’s strong! Smell this,’ he said, laughing, and passed it to his friend.

‘Not as strong as that other stuff we found last weekend,’ his mate responded, wafting it under his nose. The first guy laughed, looked over at his supervisor’s turned back, quickly did up the bottle and put it back in my bag.

‘You’re free to go,’ he said, eying me carefully. I thanked him quietly, packed my bags up quickly and turned to leave.

‘Hey, you can’t take that in, that’s got alcohol in,’ said a different, nearby, horribly watchful security guard. He called his supervisor over. ‘She’s just put that bottle of spirits back in her bag.’ He looked shiftily at his colleagues. Thanks, mate. Ensue unpacking of bag again and cries of ‘But that’s Lidl’s finest rum that is!’.

‘We can’t let any unopened bottle in,’ she told me firmly as she poured a third of the week’s alcohol onto the grass. ‘It would be the same if it was orange juice.’ Desolate, Frank and I walked back into the arena. The gate had closed behind us and we were out of all drink already. Predictable enough perhaps, but still not a good start to the week.

Thursday day turned to night in Tangled Roots. As we danced, a couple fell into the centre of our group like a pair of dominios. There was a moment, where he’d caught her and they were together, covered in glitter and neon glow sticks, him leaning over her and her hanging from his neck like a pair of tango dancers, where she managed to cram in the profound ‘Where-you-from?’ before they resumed engorging themselves on each other’s faces. Friends’ attempts at rolling cigarettes kept being thwarted at the front of the stage as the bass bounced the tobacco out of the paper. We wandered out into Downtown. After deciding to peruse the new city layout, we happened upon the Incinerator stage. The screens outside advertised women in traffic-cone bras and little else. Inside, upbeat music accompanied a strange, blue-luminescent-striped, mohicaned dancer as he pranced around the stage. We edged towards the front just as three ladies took over, one in the aforementioned traffic cones. As traffic cones and another danced about, the third took centre stage. From the dark corners, the pair brought out a tarpaulin and spread it beneath her. Oh dear.

Centre stage began to dance suggestively. The two guys I was with began to look uncomfortable. She started to strip, until she was left wearing only Lidl badges on her nipples and a grand headdress, which was suddenly clearly a model of a baked beans can pouring beans on her head. It all moved very quickly from there. In only a thong and the Lidl nipple badges she began to lick and pour baked beans from a can over herself to pumping beats and enthusiastic screaming from the crowd. When I turned back, Frank and Mike looked absolutely horrified. (When I teased them for it later, Mike’s response was ‘It’s the fact they were cold!’) We managed to follow this experience with a trip to the Little Gay Brother stage, where flouncy men in long wigs danced on a catwalk in front of a wind machine and had a thoroughly glitzy time. Thursday night seemed to be where it was at.

Friday, and I found myself asking a mustachioed steward which way to go. ‘Two roads diverged in a yellow wood,’ I said to him cheerfully at the crook.

‘Yeah, and neither of them ‘ad signs, did they?’ he replied. It wasn’t even dark, but in the welfare tent someone was having a fit, while around the sides people were sitting, grinning ghoulishly and gurning. A more clever gang than ours traipsed through the festival, each carrying the corner of a large gazebo, a slight tussle breaking out as it passed us: ‘You sit under it, you carry it!’. We lost half the gang that evening, and as usual there was very little signal to call them on. Eventually a text came through from Sophie: they were at the front of a stage. I managed to push along the edge of the tent until I reach the security guard. I pleaded with him to let me run along the front to reach Sophie at the edge of the barriers: ‘We’ll never find her again otherwise!’. He acquiescenced, and I squeezed sideways along the barrier, head low, like a crab. When I appeared under Sophie’s nose I poked her.

‘You are chaos!’ I screamed at her over the music, referencing the last six hours of searching for her.

‘You’re in a K-hole?!’ she screamed back from underneath her gold bucket hat and sunglasses, in the dark, unnerved and alarmed also by my sudden appearance on the wrong side of the barriers.

‘No!’ I told her where to meet us and, as quickly as I appeared, galloped away down the barriers in my crab pose and into the great outdoors, where I bashed into someone while apologizing for barging into someone else, ricocheting off punters. ‘I feel as spangled as that man over there,’ I told them in a gabble, by way of explanation, pointing at someone dressed as a unicorn and covered in glitter from head to toe. On my way to the others, I approached a couple passed out in a strange lump under a spotty blanket against a barrier to ask if they were okay. They didn’t respond, because on closer inspection they were a pile of rocks. Probably better that they didn’t respond, to be honest. As we moved on up the hill in the dark, cool night, it was like being surrounded by thousands of ducklings, all wide eyed and pattering along in noisy groups, swerving to avoid others. I shook someone awake as we drifted past him. ‘Mate,’ I said, ‘You’re in a bin’. He looked up at me from under his bucket hat with surprisingly clear eyes.

You try walking fast in thick mud, in pumps, in the dark, after four days of hiking around drunk

It is a truth universally acknowledged that the fastest speed at which a group can walk is directly proportional to the amount of people you’re trying to walk with. This proportion seems to be greatly exacerbated if the people you’re trying to walk our our friends – some more than others – and if it’s muddy. Boomtown 2018 was not the slowest year on record, but it certainly gave it its best shot. In only lovely red ballet pumps designed for a frolic and a picnic in the garden, not four centimetre deep mud, I was one of the Great Exacerbators of the universal truth this year, and as I struggled up the hill at close to minus hours a minute, one friend decided embarrassment would be the faster way to get me moving. ‘Kat,’ she shouted from under my arm, ‘are you on ketamine?’. While the group next to us hooted with laugher, red faced I stumbled forwards, clinging to my abuser’s shoulder, feet sticking and sliding at random in the gloop.

One of the ‘attractions’ at Boomtown this year was the ‘Booster’ ride, a contraption that appeared to spin you round and round and upside down while pumping you full of drum and bass and thrusting you 130 feet into the air. ‘The instant hangover cure’, Frank renamed it, as we watched it spinning over our heads at 3am, alerted to it by the sound of people screaming as they bore down on us from above and vomited all over themselves as they stumbled off. There was an entire murder of deliverooers – the appropriate collective noun, I’m told – all in uniform, but sans bikes, and more likely a bit ketted up than delivering pizzas to the campsites. As we went up the hill, splay footed for traction, I felt like a penguin braving the icy cold, year-long walk from the sea to the snuggly circle of mates in the middle of the land.

The citizens take over

On Sunday night, at about a quarter past midnight, the music handed over to us. At the drumming – an aftershow performed entirely by punters, banging out the last of their drugs on bins – a guy with a ‘ket 4 a kiss’ sign held proudly above his head wandered through the crowds. A giant conga line circled the bar, and one girl caught my attention, banging away, ecstatic, with sticks in both her hands and kick-dancing the drum. People danced, swayed, shimmied their shoulders to the beat nearest them. It began to take off, people climbing trees and on the roofs of the bars, dancing on tables in sparkly outfits, climbing the wooden walls. It was a party at the end of the god of all parties, stomped out in the mud.

The Radical City – is the ultimate eco-festival almost upon us?

Why is the greatest bit of Boomtown always the closing ceremony? They push you, force all the energy out of you, make you dance like you’ve got pegs on your feet, like there’s nothing else you can do but dance – and then, boom. It’s over. And then this year there was the added schtick of having an environmental message at the heart of the ceremony. Boomtown, you’re gonna make me cry. The closing message was simple: care about the environment. Footage showed tents discarded over fields and told us 20,000 tents were abandoned at Boomtown last year. Next year, we were told, would be the year of ‘the radical city’. It was enough, already, despite only a day or two before having sworn this would be my last Boomtown – I don’t have enough energy for this place anymore – to bring me back to the fold. Although next year, it’s going to be a strict three-day affair for me. Promise.