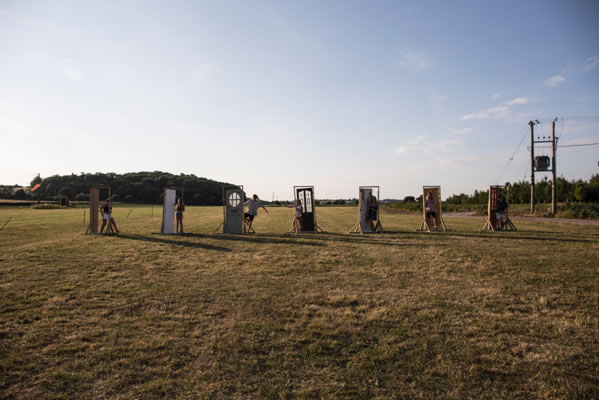 I have been coming to Barn on the Farm for a few years now. Each year the festival is a genuine highlight of my summer, the intimacy and chilled vibe of the entire weekend has always kept me coming back for more.

This year will always stand out among other years at Over Farm though, for two main reasons; the 30-degree heat, and a little thing called the Fifa World Cup. These added elements made it a festival weekend I’ll never forget.

The line-up was on-point as usual. With headline sets from the ‘two Toms’, Tom Grennan and Tom Misch, there was a perfect balance of chilled tunes to lounge around to in the sun-filled days and belters you could dance to in the evenings.

Behind the Doors Friday

My weekend started on the evening of ‘Behind the Doors Friday’ where only 2 of the stages are open for early arrivers to enjoy a taster of what the weekend had in-store. My personal highlights from that very special evening was Hudson Taylor, and the secret headliner, which turned out to be electronic music duo Honne. After quite a stressful journey of un-air conditioned trains down to Gloucester, the peacefulness of the Friday evening immediately chilled me out and get me excited for the festival ahead. The atmosphere of that ‘pre-event’ was something else, with only real music lovers on-site, all walking between stages to make sure they caught a glimpse their favourite acts.

With the England v Sweden game imminent on the Saturday afternoon, I was interested to see how many of the punters would sneak away to the nearest pub. In the run-up to the match, pretty much every artist took the stage in a red and white England footie t-shirt- this seemed to bring bands and fans together even closer than the usual BOTF.

Festivals and footie can mix

To my surprise, acoustic music and football came together that weekend in a surprising and beautiful way. Bands like Outlya and Aquilo joked that it was “the worst clash of their careers” with the footie being on at the same time as their set. But in reality, the excitement of someone keeping an eye on the score while the live music took place on stage turned out to be the makings of a rather good festival atmosphere. It added an extra dimension to the excitement of seeing your favourite band that I hadn’t experienced before. The lads of Aquilo in particular seemed rather keen on keeping up with the score in between songs. The second time they asked coincided with the exact moment England scored their second goal against Sweden and the both the crowd and the band erupting into giddy cheers. By the time England had won the match, the whole festival had the perfect excuse to sing ‘It’s Coming Home’ on loop for the rest of the weekend.

Most bands following the England win referenced the match in their own way, and Lewis Watson took the crown for sure. After his note-perfect set in the barn itself, he walked down into the packed out venue and did his encore in the middle of the crowd. He orchestrated his own rendition of ‘Three Lions’ with just his acoustic guitar and the crowd as his chorus. He split the barn into two and somehow managed to get us harmonising alongside him. It was such a unique take on an anthem.

Alongside this football frenzy, British weather really delivered for Barn on the Farm. At its peak reaching a casual 30ºC, the intense heat just added to tranquillity of the weekend, with whole families grabbing naps together in any available shade. The heat certainly added to the charm of the place too. With most people down to what can only be described as their swimsuits, there was an air of cheekiness in the air, as kid and adults alike soaked themselves under the water points and bought out all the ice cream the festival’s ice cream van had to offer.

Music highlights included the electric Anteros who rocked the outdoor stage early Sunday afternoon and Pale Waves who headlined the outdoor stage on Saturday night. With both of these bands boasting strong frontwomen- it was refreshing to see such confidence and talent from such up and coming names. (I have a strong feeling both of these won’t be classed as ‘up and coming’ for long though…)

Everything about this festival feels like a conscious choice to add to the gorgeous atmosphere which is there from the moment you arrive on site. From the exquisitely curated line up, to the trader who are invited to the cosy site, to the hand painted signs which decorate the stages and bars. Wherever you were on the farm, there was a feeling of community, in the way that it’s obvious that all the revellers want to get the same thing out of the weekend.

Due to the size of the site, it was obvious that new friendships were naturally forming, as you noticed the same people going from stage to stage and queuing for the delicious Greek food every night. With ostriches roaming around as well, there were smiles all around. One thing that really made me smile was when I was in line to collect my dinner on the final night and I spotted a friendly message tacked on a ketchup bottle which read ‘meet here for a rave tonight’. There was something about that message that made me feel that the people of the festival are what make it special and give it the unique vibe that we all come back from year after year.

Truth be told, if you like good home-grown acoustic music, Barn on the Farm is the festival for you. All I can say is I just can’t wait what line-up they are going to come up with for their 10-year anniversary in 2019.

Bring it on is all I say.