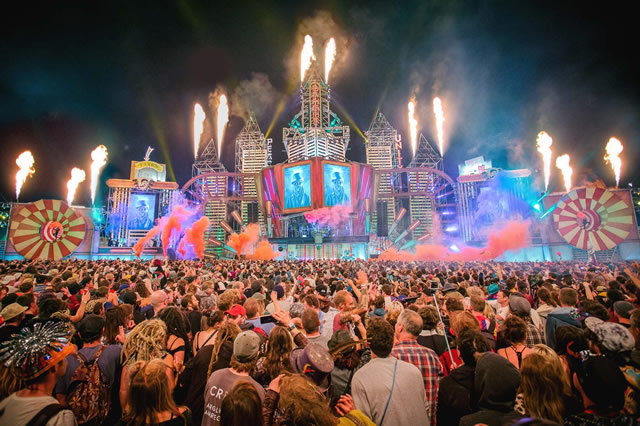 After a three-hour journey to the depths of the unknown south from our native Norfolk, we arrived late at Boomtown, not, as we had planned, before the weekend arrived. Nevertheless, we missed the hordes of (66,000) ravers flooding the gates, and had a stress free set up in the busy but comfortable camping area, totally ready for the party ahead. We thought we should first get acquainted with this humungous new expanse of festival before the evening’s carnage descended. However, nothing could have prepared us: this was not a festival, but a colossal piece of conceptual art. Every single edge of Boomtown’s streets were coloured with visual wonders. It was literally like walking round the entirely unknown city of a Mad Max film; realistic and fantastical in appropriately disturbing measures.

The sheer scale of Boomtown is immediately stunning. Regency style rooftops and palace windows surround the spectacular stage in the Town Centre, amongst balconies, walls and towers. It made for a fascinating walk; around every corner something strange led to something even more strange, and we had to drag ourselves back to camp before we got lost in the alleyways of the Metropolis without our cameras.

Get your Boomtown tickets HERE

Fed, watered and buzzing to see more of this magical place, we headed back out an hour later, and, after gawping at the Western style timber framed shacks and Victorian mechanics of the Old Town, we explored the exotic Lion’s Den stage, complete with tumbling waterfalls and ancient city ruins. Here, some of the most renowned acts performed. Natty and the Rebelship gave us some refreshingly melodic roots reggae, and we danced to their funky tunes for a while, before stopping an hour later for a well-deserved cocktail break on Whistlers Green.

A contrast to the post-apocalyptic starkness of Barrio Loco and Dstrkt 5, Whistlers Green is an oasis of healing, creativity, and inspirational speaking. The workshops available were enough to occupy a whole week of festival time – we saw wood carving, belly-dancing, tai chi and story- telling during our visit, all commencing with the upmost vigour; participants and leaders all bursting with creative enthusiasm.

Boomtown is full of a vast variety of people. Young and old, rich and poor, wild and wacky; but on Whistlers Green worlds unite more than ever. Winged fairy children dance with a silver haired beauty; bearded men teach teens trapeze. Aesthetically, it is as beautiful as the rest of the city is dystopian. It was lovely (and necessary) to see treetops and meadow after the throngs of the crowded megalopolis.

We went back to the Town Centre for the evening, just as Slaves were entering the stage. An epic performance from the British punk duo. The pair got the crowds roaring with their powerful rock riffs, energetic drums and riotous vocals.

Some of the biggest crowds we had ever seen at a festival descended for The Streets at the Lion’s Den later that night. We stayed for a while but it was hard to see anything, and we were hungry. Grabbing some delectable jerk chicken from the stall outside the stage, we stomped on, watching the fantastical characters of Boomtown cavort in the dusky evening light.

The Relic stage was also pumping – Chase and Status got everyone stomping as usual with their face shaking bass. We bounced around here until our feet were sore; but not too near the front where several man-beasts were shoulder-barging violently. The Hidden Woods was the most magical spot of all. Glowing lanterns hung amidst tall treetops where revellers danced in the clearing like frolicking dryads. The beach bar was idyllic – just what we needed to accompany the funky dub vibe and finish off the evening. We returned here the next day for Friendly Fire’s upbeat set, and it was just as lovely.

Before this year, I always thought of Boomtown as an adult-only festival. But on Sunday afternoon we visited Kidztown, and that impression has changed. The activities available were phenomenal, and even we were desperate to get involved. Kids took part in hilariously ridiculous family-friendly shows, and the Tree Top Forest School had some fascinating workshops that seemed to enrapture all involved. We made Extinction Rebellion stamps, and chatted to the workshop leaders about the national park that runs right around Boomtown. Boomtown have vowed to plant a tree for every ticket sold this year. They have also teamed up with Extinction Rebellion and launched the Leave No Trace campaign. After a weekend of pure revelry, it is good to appreciate the space that hosted the party and know the organisers of such an epic display of creativity are mindful of our beautiful surroundings. Truly a spectacular festival: flamboyant, imaginative, immersive.